Honduras is a country of Central America situated between Guatemala and El Salvador to the west and Nicaragua to the south and east.

The capital is Tegucigalpa but—unlike most other Central American countries—another city, San Pedro Sula, is equally important industrially and commercially, although it has only half the population of the capital. 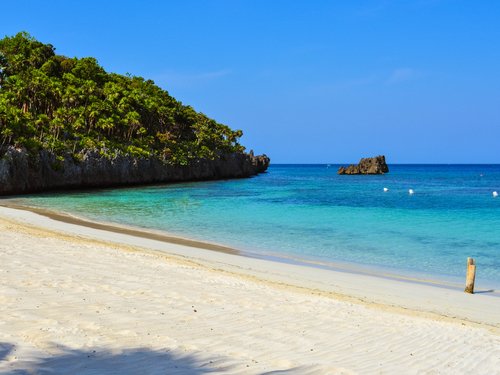 Beach on the island of Roatan.

Roatán is an island in the Caribbean, about 65 kilometres off the northern coast. It is located between the islands of Útila and Guanaja, and is the largest of the Bay Islands. The island is known for its pristine waters and fantastic scuba diving. It was formerly known in English as Ruatan and Rattan.

Honduras was home to several important Meso-American cultures, most notably the Maya, before the Spanish Colonisation in the sixteenth century. The Spanish introduced Roman Catholicism and the now predominant Spanish language, along with numerous customs that have blended with the indigenous culture.

It became independent in 1821 and has since been a republic, although it has consistently endured much social strife and political instability, and remains one of the poorest countries in the Western Hemisphere.

The bulk of the population lives a generally isolated existence in the mountainous interior, a fact that may help to explain the rather insular policy of the country in relation to Latin and Central American affairs.

Like its neighbours in the region, is a developing nation whose citizens are presented with innumerable economic and social challenges, a situation that is complicated by rough topography and the occasional violence of tropical weather patterns, including the devastation wreaked by Hurricane Mitch in 1998.