Lebanon is located on the eastern shore of the Mediterranean Sea; it consists of a narrow strip of territory and is one of the world’s smaller sovereign states. The capital is Beirut.

Lebanon shares many of the cultural characteristics of the Arab world, yet it has attributes that differentiate it from many of its Arab neighbours. Its rugged, mountainous terrain has served throughout history as an asylum for diverse religious and ethnic groups and for political dissidents. It is one of the most densely populated countries in the Mediterranean area and has a high rate of literacy. 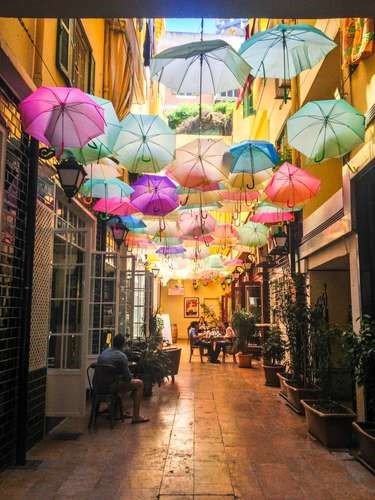 Decorative umbrellas at an outdoor café in the Gemmayze neighbourhood of Beirut, Lebanon.

Though  its coastal region, was the site of some of the oldest human settlements in the world—the Phoenician ports of Tyre (modern Ṣūr), Sidon (Ṣaydā), and Byblos (Jubayl) were dominant centres of trade and culture in the 3rd millennium BCE—it was not until 1920 that the contemporary state came into being. In that year France, which administered Lebanon as a League of Nations mandate, established the state of Greater Lebanon. It then became a republic in 1926 and achieved independence in 1943.

This outward image of vitality and growth nevertheless disguised serious problems. It had to struggle to define its position in relation to Israel, to its Arab neighbours, and to Palestinian refugees living in the country. The delicate balance of proportional sharing of power between the country’s religious communities was eroded under the pressures of this struggle; communal rivalries over political power, exacerbated by the complex issues that arose from the question of Palestinian presence and from a growing “state within a state,” led to the outbreak of an extremely damaging civil war in 1975 and a breakdown of the governmental system. After the end of the civil war in 1990, the country gradually reclaimed a degree of relative socioeconomic and political stability; because of the continued problems of external intervention and troubled confessional relations, however, many of Lebanon’s challenges persisted into the early 21st century.

Lebanon has borders to the north and east with Syria, to the south with Israel, and to the west lies the Mediterranean Sea.