Malawi is a landlocked country in southeastern Africa.

Lake Malawi (Nyasa) at its border is the southernmost lake in East African Rift Valley. It is one of the largest, deepest and beautiful freshwater Lake in the world.

The country extends approximately 520 miles from north to south and width varies from 5 to 100 miles.

The Portuguese left Mozambique for Malawi in the 17th century.

David Livingstone’s was the first Scottish missionary to reach the land in 1850 that preceded other missionaries and traders.

The British then instituted the Nyasaland and made it their protectorate. In 1915, Reverend John Chilembwe began a rebellion against the British rule, killed some of the whites and displayed one’s head at his Church’s door. He was later on killed by soldiers. Nyasaland (Malawi) was forced into a federation with northern and southern Rhodesia (Zambia and Zimbabwe) by the British in 1953.

Nyasaland gained independence as Malawi in 1964 with Dr Hastings Kamuzu Banda as the president of the one-party state. A multi-party election was held in 1994 and Bakili Maluzi won as president. He set free from prison those who had been locked down for political reasons and re-instituted freedom of expression. Peter Mutharika won the May 2014 presidential elections. 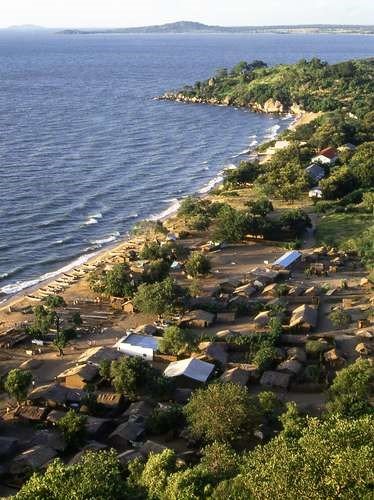 Habitation at the Lake Nyasa shore.

The education system comprises of compulsory eight years of primary schooling from age six, the first four years’ instruction language is local then the rest is English.

The country has a tropical climate but sub-tropical at high altitudes. It has a hot and wet season from November to April and a relatively cold and dry season from May to mid-August. Tobacco is the main cash crop, followed by coffee, tea, sugar, cotton and groundnuts. One of the major staple foods in the country is Nsima, which is a sticky porridge made from maize, cassava and sorghum flour.

It is bordered on the east and southwest by Mozambique, on the north and northeast by Tanzania and the west and northwest by Zambia.