It is located at the west coast of Africa across the Equator. The capital city is Libreville. The country still holds to French language and culture.

Between the 14th and 19th century, the Portuguese explorers settled there, followed by French, Dutch and British. In 1839, France signed treaties with the chiefs at the coast and Mpongwe ruler gave his supremacy to them. In 1910, Gabon became one of the four territories of French Equatorial Africa. Juenesse Gabonais was the country’s first political party founded around 1922. Gabon voted to become a free republic of the French in 1958. It then received independence in 1960. In the year 1967, Omar Bongo became the country’s second president after Leon Mba deceased. He served for seven consecutive terms. A multi-party political system was established. In 2003, there was a constitution amendment cancelling term limits that would allow President Omar Bongo to rule for life. He then died in 2009 and his son Ali succeeded him. President Ali was reported to suffer from stroke, raising concerns that he would not be able to execute his duties well. 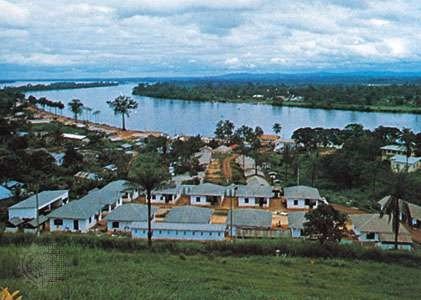 Lambaréné, on the Ogooué River.

French is the official language.

The education system comprises of compulsory ten-year learning for children from age six to sixteen, then secondary education of seven years divided into two cycles of four and three years for student aged twelve to eighteen.

The country’s most popular sport is football.

The national dish is Nyembwe chicken. Nywembwe is palm oil.

Gabon is bordered to the north by Equatorial Guinea and Cameroon, to the east and south by the Republic of Congo, to the west by the Atlantic Ocean and off the coast by islands of Sao Tome and Principe.