It is situated along the Gulf of Guinea and the Atlantic Ocean in West Africa.

Portuguese explorers arrived in Ghana in 1482 and kicked off trading in gold, ivory and timber with the Akan people. The trade slavery became rampant in the region overtaking gold in the 1500s.

In the 1600s, the Dutch, Britons, Danish and Swedish got to Ghana for the slave trade. The Portuguese later surrendered their territory to the Dutch in 1642 and left the Gold Coast. In 1807, the British dominated the region and prohibited the slave trade in it successfully. Gold Coast became an official British protectorate in 1874. In 1947, the Pan-African Congress Kwame Nkurumah returned to the Gold Coast from London and created the Convention People’s Party in 1951 and mobilized the people to confront the colonial rule. On 6th March 1957, Ghana became the first sub-Saharan black African country to receive its independence from the Europeans.

Ghanaians formed a new constitution in 1960 and elected Kwame Nkurumah as their first president. Later in 1966, he was overthrown by a coup due to the country suffering economic difficulties and foreign debts and he moved to Conakry in Guinea. He was diagnosed with prostate cancer and died on 27th April 1972 in Romania where he sought treatment. Lieutenant Joseph Arthur Ankrah took over the presidency in 1969. A new constitution that allowed the restoration of multi-party political systems was formed in 1992. President Nana Addo won during the 2016 elections. 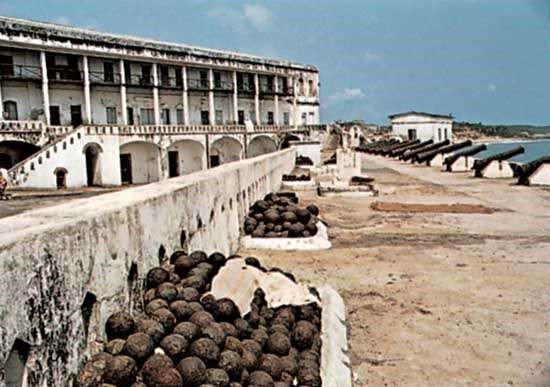 The education system comprises of free and compulsory basic education of 12 years for children aged four to fifteen, secondary level and tertiary levels.

The national dish is Fufu. The official language is English.

Ghana is bordered in the west by Ivory Coast, in the north by Burkina Faso, in the east by Togo and in the south by the Gulf of Guinea and the Atlantic Ocean.