Sudan is located in northeast Africa. It was Africa’s largest country before into two in July 2011. The capital city is Khartoum and the largest city is Omdurman, located on western banks of Nile River in Khartoum state.

it has quite a number of tourist attraction sites that include the National Museum, Omdurman camel market in Khartoum, pyramids, and the Red Sea coastline.

Ottoman Empire conquered the northern part of the country around 1821. Later, the Ottman Empire pulled out and the country was under the joint rule of British and Egyptians between 1899 and 1955.

It gained independence on 1st January 1956. In 1983, Sharia Islamic law was established in the country by President Numeiri. War broke in 2003 between pastoralists and farmers concerning the ownership of the Darfur region causing massive displacements and 300,000 deaths. Later on, in 2011, the country was split into two forming South Sudan. 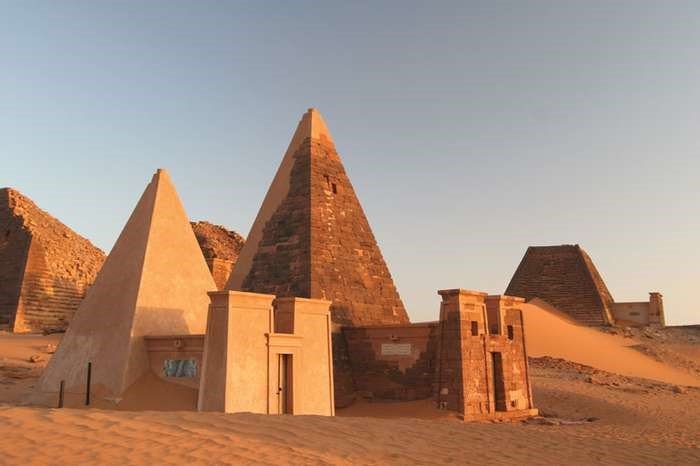 The country’s official languages are Arabic and English.

It is the fourth largest country of the Arab world by area.

The country’s most popular sports are football and athletic.

The country has a tropical climate. The main subsistence crops grown in the country are sorghum, millet, wheat, cowpeas, corn and beans. Are cotton, sisal and fodder crops are produced.

The common dishes in the country are kisra, ful medames and millet porridge.

The major industries in the country for exports are tannery, leather, paper mills, gum, and weaving mills.

Sudan is bordered to the north by Egypt, to the east by the Red Sea, Ethiopia and Eritrea, to the south by South Sudan, to the west by the Central African Republic and Chad and to the northwest by Libya.

Peer At The Pyramids Of Meroe