Guinea is located at western Africa on the Atlantic coast. It was separated from Senegal and became a French protectorate in 1891.

It gained independence in 1958 with Ahmed Sekou Toure as the president.

In 2000, rebels’ attacks started at the country’s border regions with Liberia and Sierra Leone causing over a thousand deaths and thousands were displaced from their homes. The blame fell on Liberia, Sierra Leonean United Revolutionary Front rebel group, and Burkina Faso army for attempting to sabotage Guinea.

In 2003, Lansana Conte was elected for the third term without the opposition taking part in the elections. Conte died in 2008 after which the military took over power despite the international criticism.

However, the country later returned to civilian rule and int December 2010, Alpha Conde was elected president during the run-off presidential election. A discord between security forces and supporters of the defeated aspirant Cellou Dalein Diallo led to an emergency being declared in the country. 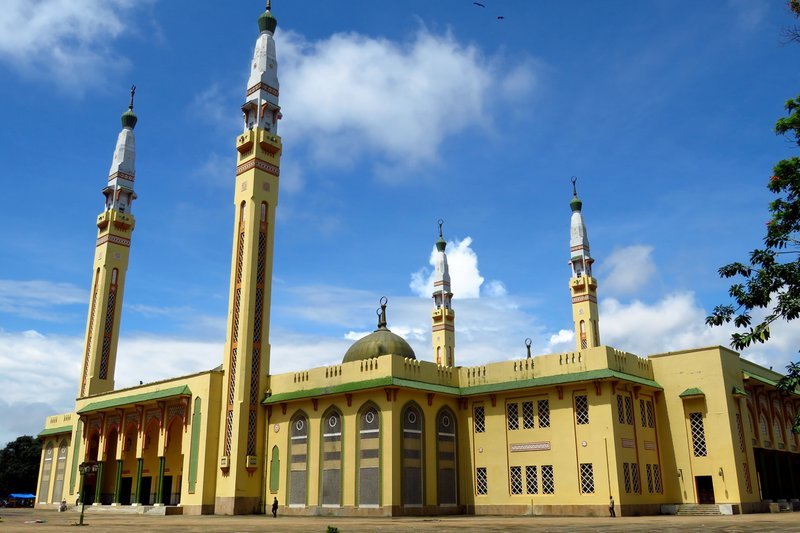 The Grand Mosque in Conakry

In 2014, there was an Ebola outbreak in southern Guinea spread to Liberia and Sierra Leone and lasted for two years killing 11,300 people.

Guniea is known for Mount Nimba Strict Nature Reserve, which has a forest rich in indigenous plants and animals.

The major exports from the country are Bauxite and Alumina.

The majority ethnic groups are Fulani, Malinke and Soussou. There are other minority groups in the country.

The education system is free and compulsory for all children from age 7 to thirteen.

The staple foods in the country are cassava, bananas, rice and yam with chicken, meat or fish.

Guinea is bordered to the west by Guinea-Bissau, to the north by Senegal and Mali, to the east by Cote d’Ivoire and to the south by Liberia and Sierra Leone.