Gambia is one of Africa’s smallest countries located in Western Africa.

The country’s present boundaries were put down by an agreement between Britain and France. Then it became a British protectorate around 1894.

It received independence in 1965. In 1982, Gambia and Senegal formed a loose confederation called Senegambia although it later collapsed in 1989.

Lieutenant Yahya Jammeh took over the country in 1994 through a coup. He was elected president of the country in 1996 but without three major political parties taking part in the election. He defeated several coup attempts and led the country until 2017. In 2013, President Yahya Jammeh notified UN that the country would withdraw from Commonwealth to defend his country’s dignity by whatever means necessary. He described Gambia as a “neo-colonial institution”. It is said that this move was made because of the international criticisms on human rights violation by the government.

In 2015, President Jammeh declared that the country had become an Islamic Republic; he did so to break from the country’s colonial past. Presidential elections were then held on 1st December 2016 when surprisingly opposition candidate Adama Barrow defeated Jammeh Yahya. 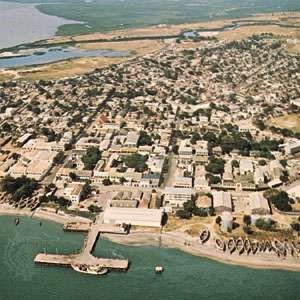 The port of Banjul, near the mouth of the Gambia River,

The most popular sports are soccer, basketball, athletics, cricket and traditional wrestling.

The national dish is groundnut stew and vegetables.

Most people there practice agriculture. The country exports Peanut. Also, its Atlantic coastline has popular beaches and is home to the Jufureh village, where Kunta Kinte novel character of Alex Haley’s novel belongs.

Gambia is wholly surrounded by Senegal to north, east and south.