Zambia is a landlocked country located in southern central Africa. The capital city is Lusaka. It is home for The Lusaka National Museum which showcases archaeological findings and modern art. It is also the Freedom Statue that commemorates the country’s struggle for independence.

Zambia was formerly known as Rhodesia. The Northern Rhodesia was controlled by the British from 1889 to 1964 when it gained independence and it was renamed into Zambia with Kenneth Kaunda as the first president who ruled for 27 years. The first multi-party elections were held in 1991 with Frederick taking over as the president. He stepped down in 2001 when President Levy Mwanawasa took over and served until his death. Edgar Lungu was elected as the president in 2015.

The Copperbelt Province and Lusaka are the most populated regions and they are the main economic centre in the country. The highest point in in the country is Mafinga Central on Mafinga Hills at 2,339 meters high. 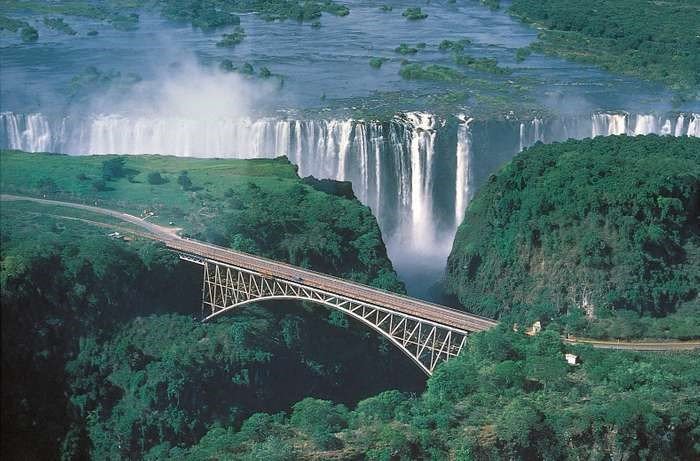 The Victoria Falls Bridge across the Zambezi River, connecting Zambia and Zimbabwe

The country’s official language is English.

The official religion is Christianity.

The popular sports in the country are football, athletics, boxing, netball, volleyball and rugby.

It has a tropical and sub-tropical climate varies with the altitude. There are two seasons; the rainy season begins November to April and the dry season begins May to October. The major crops that are grown there are corn, cotton, soybeans, tobacco, groundnuts, sorghum, wheat and rice. The major industries in the country are copper mining, construction, beverages, textile and horticulture.

Soak In The Devils Pool

Feel The Power Of Victoria Falls