The United States Virgin Islands is an unincorporated island territory of the United States, and has been since 1917, situated at the eastern end of the Greater Antilles, about 40 miles (64 km) east of Puerto Rico, in the north eastern Caribbean Sea.

The territory is geographically part of the Virgin Islands group, which also contains its near neighbour, the British Virgin Islands. 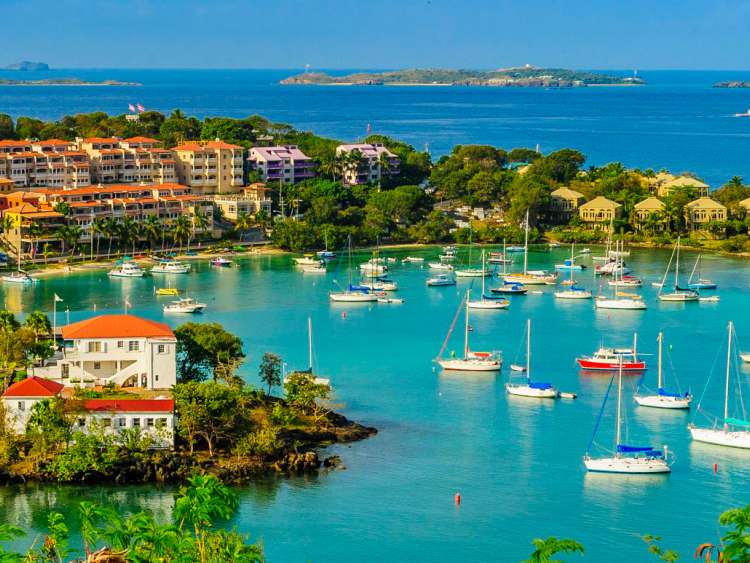 Cruz Bay, on the island of St John.

The territory is composed of three large islands—St. Croix, St. John, and St. Thomas—and about 50 small islets and cays. The capital is Charlotte Amalie, on St. Thomas.

The islands are famous for its beautiful white sand beaches, turquoise waters and wear round excellent weather.

The U.S. Virgin Islands have a rich cultural legacy that lives on today. The flags of seven different nations have flown over these islands, leaving their distinct imprint on the people, history, culture, architecture, art, music, and cuisine.

There is plenty for tourists to see in the historic towns with 17th and 18th-century forts, museums and historic sites.

Be immersed in the pulse of the local music and take part in the vibrant and colourful cultural displays during the annual carnivals and festivals. With a tapestry of West Indian, African, European, and American influences you’ll be sure to experience the diversity. You’ll taste it in the local fare and cuisine that spans the region and the globe.

Be Fluent In A Foreign Language

Watch Orangutans In The Wild