Somalia is the easternmost country in Africa located on the Horn of Africa. The capital city is Mogadishu, which is one of the earliest Arab settlements along the East African coast in the 10th century. Mogadishu is locally called Xamar or Hamar and it is a historic centre of trade, commerce and culture. Mount Shimbiris is the highest point in Somalia located at Al Madow mountain range.

Somalia was called ‘a land of punt’ by the Egyptians in the past. It used to trade gold, ebony, Blackwood, frankincense and myrrh with Egypt.

Islam arrived in the country between the 7th and 19th centuries where governance was conducted by a series of rival sultans.

The Europeans later came in the 19th century and occupied the northwest part. The country was divided between the Italians and the Britons.

The Italian Somaliland and British Somaliland gained independence in 1960, where they merged and became the United Republic of Somalia. 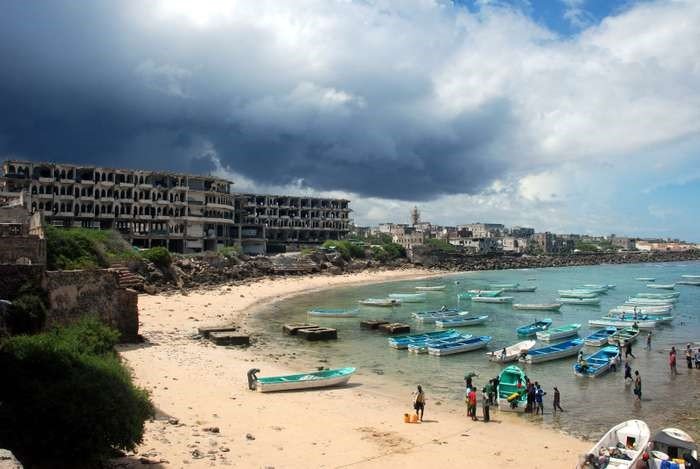 Fishermen at the port of Mogadishu, Somalia.

The official language is the mother tongue, Somali.

Due to the prolonged fight with Alshabab in the country, most of the somali communities have migrated and settled in Kenya, Djibouti and Ethiopia.

The official state religion is Islam.

The country has a tropical climate; it is hot and dry throughout the year. The land is semi-desert with thorn bush savannah. The crops grown in some regions are corn, sorghum, beans, rice, cotton and sesame.

The common meal is Shigni which is a hot sauce eaten with rice, bread or spaghetti.

Somalia is bordered by Djibouti and Ethiopia to the northwest, Kenya to the southwest, the Indian Ocean to the east and Gulf of Aden to the north separating it from Yemen. It stretches from just south of the Equator northward to the Gulf of Aden.