Madagascar is located off the southeastern coast of Africa. It is the fourth largest island in the world after Greenland, New Guinea and Borneo.

A sea captain Diogo Dias was the first European to see the island. The French invaded the country in 1883. In 1896, the Merina Kingdom was toppled and Madagascar became a French colony. French then made it its overseas territory in 1946. France defeated the Malagasy rebels who fought for independence in 1947. It gained independence in 1960 with Philibert Tsiranana as the president. In 1975, Didier Ratsiraka took control of the country. He ruled as a dictator until 1991 when he was overthrown due to economic collapse.  He later regained his presidency but lost again to Marc Ravalomanana in 2001 in an election and fled to France. Andry Rajoelina won the presidential elections in 2018. 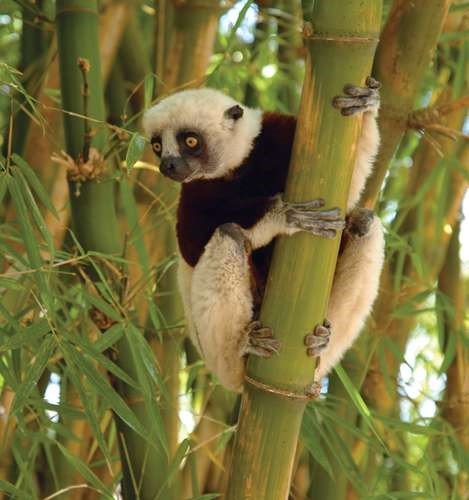 Coquerel’s sifaka, a type of lemur found in Madagascar

The country’s official languages are Malagasy and French.

Majority of its citizens have indigenous beliefs and worship a being that they believe to be supremely called Andriamanitra. They sacrifice zebus and view their ancestors as the link between the living and the dead. However, there is a small minority in the country that are Christians.

The major sports in the country include athletics, football, boxing, judo and tennis.

The national dish Romazawa which consists of beef, chicken or pork served with rice.

Madagascar is at the southwest of Indian Ocean and is detached from African by the 250 miles Mozambique Channel from the African coast.

Walk The Avenue Of The Baobabs