Libya is a North African country. Most of it is desert and it has abundant oil. Majority of the population has settled at the coast and the mainland at Tripoli which is the capital city.

The country has got three historical provinces; at the northwest is Tripolitania, at the east Cyrenaica and at southeast Fezzan.

The Romans invaded Libya in 74 BC and took control of the land for decades. Later, in AD 643, it was invaded by the Arabs who spread the Islam religion. In the 16th century, the country became part a section of the Ottoman Empire which united the three provinces of Tripolitania, Cyrenaica and Fezzan into one government. Italy then took control of the land in 1911 from the Ottoman Empire, resulting in a twenty years revolt that was led by Omar al-Mukhtar. The Italians were removed in 1942 by affiliates in Libya causing division of the country between the British and French.

Libya later gained independence from Britain and French with King Idris al-Sanusi. The king was overthrown by Muammar Gaddafi in a coup in 1951. Gaddafi ruled for four decades until he was overthrown and killed on 20th October 2011 after an Arab revolution. 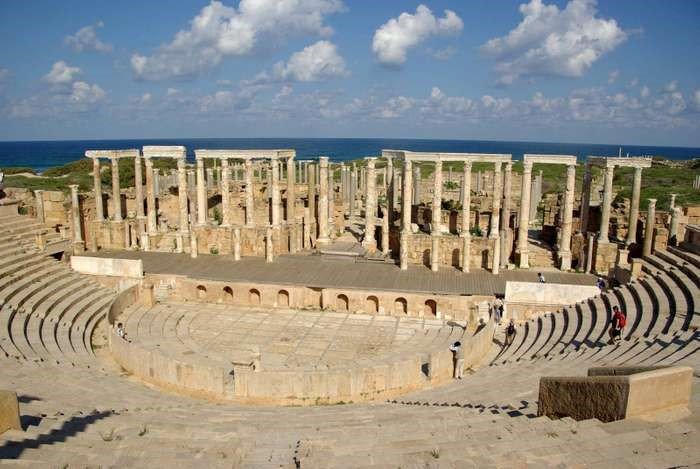 Remains of the Roman amphitheatre at Leptis Magna.

Libya has a size of 1.8 million squared kilometres. It is the fourth largest in Africa and as of 2020, it had a population of 6.871 million.

The education system comprises of primary school learning for children from age six to fifteen and secondary learning for students from fifteen to eighteen years old.

The predominant religion is Sunni Islam.

The country’s largest export is petroleum products. The agricultural products are mainly fruits and vegetables like dates, almonds, grapes, watermelon and citrus fruits. However much of the food is imported because the climate is dominated by the hot arid Sahara.

Libya is bordered on the north by the Mediterranean Sea, on the east by Egypt, on the southeast by Sudan, on the south by Niger and Chad and on the west by Tunisia and Algeria.